Yes, Horses ‘Figure Out’ Tasks from Watching Humans but Rarely Mimic Them

You put your right hand on,

You take your right hand off,

You put your right hand on… the handle,

And you turn it to the right….

You do the hokey pokey and you turn yourself around. That’s what (getting out of your barn) is all about!

Welcome to the social learning version of the Hokey Pokey. As many owners already know, horses can learn by watching what we do—especially when it comes to things we don’t want them to do, like opening doors…

Science, meanwhile, has recently confirmed it: yes, horses are capable of ‘interspecies social learning’ – learning how to perform tasks by watching people do them.

There’s at least one remaining question, though. How exactly are these animals learning from watching us? What’s the process, and what’s going through their minds? Is it all essentially one big Hokey Pokey, where they mimic what we do as best they can with their non-human body parts?

According to German researchers, no, that’s not really it.

Most horses don’t really seem to be trying to recreate the same maneouvers that we’re doing. Instead, observing us achieving a task—like opening a door latch—helps them realise that it’s possible to do it and it has something to do with the mechanisms we touched. The rest, they say, is up to their own problem-solving.

“The horses in our study mainly appeared to benefit from what we call ‘enhancement,’ said Konstanze Krueger.

“Enhancement is sort of like giving hints,” she explained. “You hint about where to find the clues, or what parts need to be manipulated, without step-by-step instructions. Essentially these horses were learning from the humans that a certain button needed to be pushed somehow, and they took it from there through trial and error.”

In other words, horses won’t necessarily copy a human’s exact movements or use equivalent parts of the body, Krueger said.

To test how horses learn from humans, Krueger and her fellow researchers designed social learning tests for horses at their own farms.

The horses were given access to a closed food box and, one meter apart, a button on a box on the ground that triggered an electric opening of the food box. About a fifth of the horses were left to try to figure out how to open the box on their own. The others were given the chance to watch a human push the button, activating the opening of the box.

Each horse’s own regular handler acted as a demonstrator, because horses are more likely to learn from individuals who are familiar to them, according to Krueger. The researchers randomly had the handlers perform one of four demonstrations for pushing the button: with the hand, with the forehead, with the forehand and head at the same time, and with the foot. 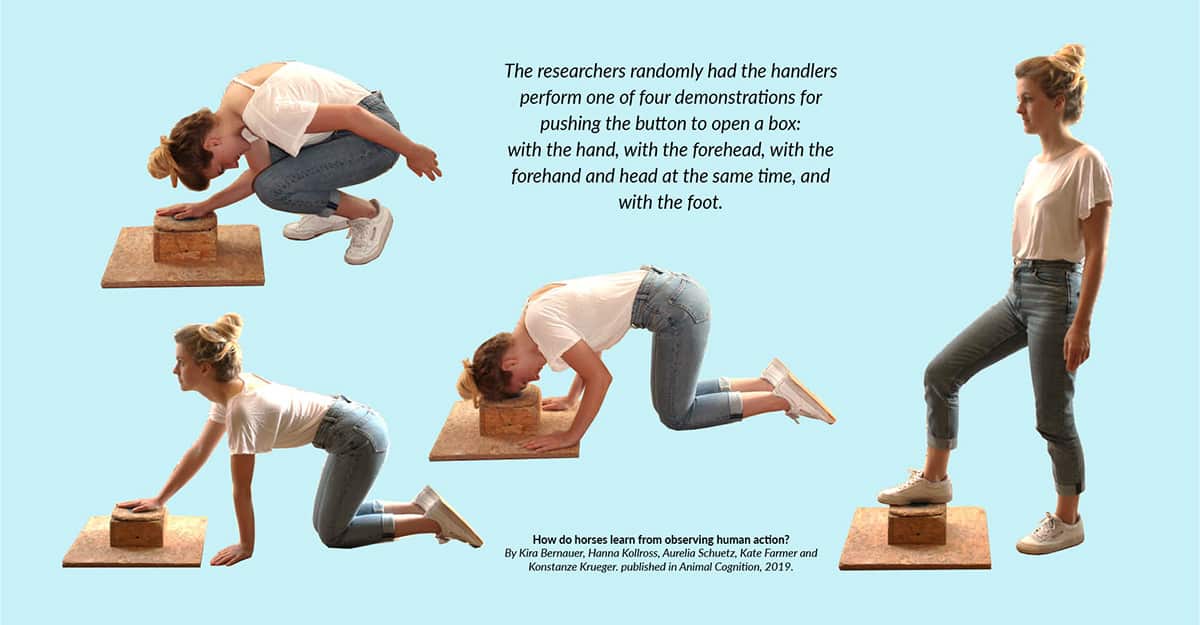 Altogether, 75% of the horses who watched a demonstrator ended up learning to open the box. (The researchers were sure the horses had “learned” when they were able to open it 20 times in a row.) That was more than double the success rate of the small group of horses that didn’t have a demonstrator, in which 31% eventually figured out how to open the box, Krueger said.

However, regardless of the kind of demonstration, the horses generally used their mouths—through nibbling, biting, licking, and pushing with the lip—to push the button, according to Krueger.

Some people might argue that this shows a reduced level of intelligence for the horse, since the horse didn’t ‘understand’ that he needed to copy the exact movements, Krueger said. However, it’s also possible that the very opposite is true—the horse understood what needed to be done and, through trial and error, adapted the situation to his own abilities or even preferences.

“You could certainly argue that it’s cleverer to observe a person and then make up your mind how you would do it yourself, and come up with your own technique,” she said.

Still, there was individual variation, she added, explaining that some horses did attempt the same technique as their demonstrators. That was especially true, she said, for the use of the foot.

Whether this means horses assimilate human feet to their own feet is yet to be determined, according to Krueger. “Of course I cannot look into the horse’s head, but yes, some appear to observe closely and reason that they have to use a hoof when humans use their foot,” she said.

In that respect, in the “equine social learning hokey pokey” might do better to start, rather than the arms, with the feet.

Professor Konstanze Krueger from the equine economics department of University of Nürtingen Geislingen, was lead author in an earlier study on the ability of horses to open door and gate mechanisms.

The study How do horses (Equus caballus) learn from observing human action? by Bernauer K, Kollross H, Schuetz A, Farmer K, Krueger K (2019) is published in the journal Animal Cognition and can be found here.

Christa Lesté-Lasserre is a freelance writer based in France. A native of Dallas, Texas, Lesté-Lasserre grew up riding Quarter Horses, Appaloosas, and Shetland Ponies. She holds a master’s degree in English, specializing in creative writing, from the University of Mississippi in Oxford and earned a bachelor's in journalism and creative writing with a minor in sciences from Baylor University in Waco, Texas. She currently keeps her two Trakehners at home near Paris. Follow Lesté-Lasserre on Twitter @christalestelas.

The Challenges of Recognising Stress in Horses

Horse Rider Weight Gain: If you gained some holiday weight, don’t give up horse riding

Not in Front of the Ponies! Why Humans Should Control their Emotions around Horses

Like Apples and Oranges: There are Different Ways to Research Horses and People
2020-01-11
Previous Post: A New Year… A New You?
Next Post: How do we Measure a Horse’s Quality of Life?

It’s packed with so much! Always has something worthwhile and interesting. Keeps me in touch with what’s happening in the horse world 🙂

Thank you we love our magazine 🙂

Thank you for a wonderful magazine! 🙂

I love reading Horses and People Magazine because it is down-to-earth and full of educational, inspirational stories.

Great to meet you at Equitana. Looking forward to your next issue!

I love Horses and People magazine because its glossy, up to date and always a exciting read. Best of all lots of people and horses can benefit from reading it.

Love Your magazine, all good knowledgeable content and not too much overkill on not needed advertising. Have been following now for very close a decade now. 💕💕

Dear Horses and People, your articles are informative and very relevant, and I pounce on your magazine every month.

I am currently studying Bachelor of Equine Science at CST Uni, and the articles that are in you mag are very helpful and interesting.

I have read this magazine for years very informative. Medical, herbs that may help, barefoot versus shoes. Always with options.

The Challenges of Recognising Stress in Horses

Horse Rider Weight Gain: If you gained some holiday weight, don’t give up horse riding

Not in Front of the Ponies! Why Humans Should Control their Emotions around Horses

Like Apples and Oranges: There are Different Ways to Research Horses and People

Help us deliver our mission to safeguard and improve the lives, welfare and safety of horses and people. Your support keeps important information free from paywalls and accessible to all horse owners. If you like what you read on this site and want to help us deliver more tomorrow, please support Horses and People today.