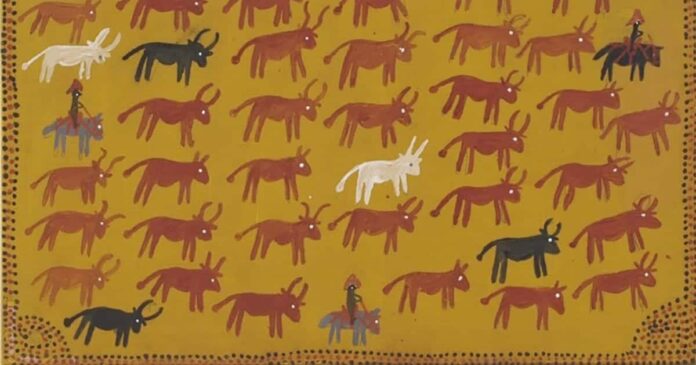 From the point of first contact with European explorers and pastoralists, Indigenous Australians used art to better understand the strange new animals that were appearing on their country. The first horses they saw would have actually been ponies from Timor that had been brought over by the Indonesian Macassans who had trading relationships along the north coast. The local people called these little equines ‘landol’, banteng cattle (buluki), buffalo (nganaparru), pigs (bigi bigi) and goats (nenigud). Often these were left behind to roam and become feral.

These early encounters were significant, and give an insight into attitudes to animals and cultural practices on both sides. From around 1900, the horse became a creature not just observed from a distance, but soon well-known and even loved as a work partner, by the first generations of highly skilled male and female aboriginal stock workers.

Moreover, many of the leading early artists of the Papunya Tula art movement in 1971 in the Western Desert had also worked as stockmen. Pastoral work had given them financial independence and sense of self-agency as well as language skills and the experience of moving between two cultures. Some even took their name from work, such as Billy ‘Stockman’ Tjapaltjarri (1927- ) cousin to the iconic Clifford Possum Tjapaltjarri.

While many of us might be familiar with their story, what we might not know is oft times Aboriginal women were riding alongside the men, and in many cases leading all-women teams. To find out more about the lives of Aboriginal stock women in the pastoral industry, I spoke with Dr Tauri Simone, a Koa woman whose original connections are to Central Western Queensland in the Channel Country.

Dr Simone, a stockwoman herself who has worked across remote Australia, recently completed her PhD, Aboriginal Stockwomen: Their Legacy in the Australian Pastoral Industry. She demonstrates how Aboriginal women played an important role and in the course of her research, she ‘yarned’ with numerous older aboriginal women subjects who had worked as stockwomen.

Many of these women learned to ride as children by sitting up in front of the saddle with their own stock women mothers; and many went on to become expert riders and horse breakers in their own right, often teaching not only their own children to ride but also the owners and manager’s children.

While in their photos (see below), Aboriginal stockwomen like Maudie Moore, and Nancy Watson look shy and modest, they were unbelievable tough. As Dr Simone noted in a recent interview with the ABC, ‘They were amazing women [and] half the stuff they did, I wouldn’t attempt,’ she said. ‘Maudie Moore, jumping off a horse, grabbing a bull, swinging him down, cutting off his horns, tagging his tail and jumping back on the horse — and she was in her late 50s — these were hard, strong, women of that time’.

Local aboriginal women, who could ride, drove, and find water for stock, were highly desirable employees for many remote region pastoralists between the 1900s and ‘50s.  These women knew horses, they knew cattle, they knew the country, they knew where water was, and they knew the work. They drove stock in directions that avoided sacred sites. Often, whole teams of women were put together – for ‘horse tailing’ [droving behind the cattle] mustering, boundary riding, de-horning, branding and so on.

The cyclical nature of the role, reflecting wet and dry times of the year in the Top End suited the women well. It allowed them to earn a wage for dry part of the year, and in the wet season, when land was impassable for stock, they could perform their cultural obligations to country and family.

Dr Simone is presently based at Gogo Station just south of Fitzroy Crossing in the Kimberley. She and I caught up by phone to discuss her doctoral findings, and talk about the relationship between the remarkable earlier generation of indigenous stock women and their horses.

Is it the first time this subject has been explored in a scholarly way?

Yes it’s the first time anyone has looked at aboriginal stockwomen, although various people at conferences have said ‘it’s about time somebody did it’, and I thought, why not?

What gave you the idea?

I sort of fell into the industry about 14-15 years ago and it was sort of just all set up and it felt like something I was meant to do. I had done an Honours paper on resilience and the impact of aboriginal stock men in the pastoral industry going back to the 1860s. Then, after that I started to ‘find the women’ … I became very passionate about it. There’s not an indigenous person in this country who has not been impacted either directly or indirectly by the pastoral industry in some way.

And I think, with NAIDOC taking place [in July] this year, we need to start telling the truth, and this is that women played a significant role in establishing the continuation of the industry prior to the stock men – who I think were often the children of these women.

But men always seem to get the credit … I think we have to dig out the positives to give some hope and pride to our younger kids as well. These women stayed strong, they were resilient, and they succeeded. They had a better life [out on horseback, mustering] than people in the missions. Some pastoralists were harsh, but many weren’t, and it gave the women a chance to be on country as well, so culture could be continued.

Was horse riding a ‘door to freedom’ for the indigenous stock women?

It definitely was – riding, being on their own, going droving, were all ways to get away from the homestead and to be on country.

What is your background with horses and stock work?

I got my first horse at about ten, stopped in my early twenties, circumstances weren’t with me for having more, but now I’ve ten I can see from my kitchen window at the moment so that’s ok! But the good thing is that now, some of the old fellas are pushing back to using horses for working stock, rather than motorbikes and choppers. It depends on the country of course, but the horses are a lot easier on the cattle, especially when they know what they’re doing.

And the relationship between indigenous women and their horses?

I think it’s very special. They were companions, they would have spent nearly all their time together, especially during droving. The thirteen stock women of Lawn Hill Station, for example, had wild brumbies, which they would have caught and trained up as stock horses. This reflects the whole indigenous aspect of being able to read animals and form relationships with them – we learn about animals, trees, plants and the interconnections from a very young age, and I don’t think horses were any different. Indigenous people would have first observed from a distance how Europeans were forming partnerships with their horses. And you know as we all know, you have to have a good relationship with your horse.

Your thesis really shows up the stereotypes in a manner that gets away from Aboriginal women as servants or as sexualised.

The black men who could’ve done the stock work were called up for the war, or away, or victims of the frontier wars. But the women had stayed on country, so they stepped up and took on the roles. There were bad pastoralists, but also there were good ones. White women at that point weren’t offering to do the work (at least not at this time in history). And the black women knew the environment,  where to get water and food, how to find their way around – they taught the pastoralists a lot of things!

Weeda Munro for example, was still working up until her 70s. Still riding. Taking cattle, I wouldn’t do what she could – you know, knock a bull [using the horse to shoulder it to the ground] and jump off, de-horn it, tag it then turn it back into the mob – I mean that’s just crazy and dangerous, but they did it.

Also, I discovered to my surprise that a lot of these women rode in men’s clothing, as it was against the law to hire Aboriginal women as stock workers – pastoralists could go to jail if they did, or get fined. The archives show stations with dozens of domestics or gardeners, and I thought ‘ah ha there’s something going on here’. They used hessian bandages to wrap up their breasts – so a lot of the old stories of the skills of ‘drovers boys’ could have been about ‘drovers girls’…

Listening to Tauri talk about her discoveries was wonderful. Her research has big implications for race relations, identity and family history, histories of the pastoral industry, and indigenous representations of horses in art, story and photography. Fortunately for those who want to know more, she has a current publisher, the University of Western Australia, and she’s in the process of turning her doctorate into a book.

What shines through her research, is how horses, at first ‘alien’ beings, quickly became ‘doors to freedom’ for generations of skilled and professional indigenous women pastoral workers, reminding us not to forget their legacy, and to know that in the early 20th century, some of our best riders were aboriginal women. 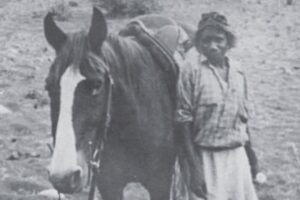 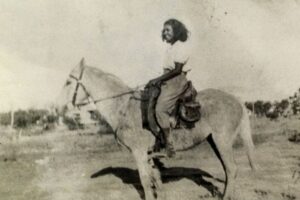 This article appeared in Horses and People May-June 2019 magazine. 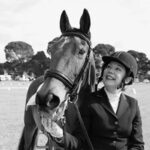 An art historian who's published extensively on the domestic interior, Dr Georgina Downey is the human of Classic, the dressage schoolmaster and Angas, the Cairn terrier. In this regular Horses and People in Art column, she provides a unique equine-centred perspective to famous equestrian artworks.

Looking to advertise with us? Contact Cristina Wilkins on 1300 230 484 or send us an email at editor@horsesandpeople.com.au