A team of researchers from Italy, Germany and England successfully developed and validated a standardised scale to recognise pain in horses based on their facial expressions. Called a Horse Grimace Scale, the scale is easy to teach and will assist in pain detection in horses. It will have a positive impact on horse welfare, particularly when they undergo routine painful procedures, such as castration.

For this open-access study, a group of 40 stallions of different breeds aged 1-5 years underwent surgical castration with closed technique under general anaesthesia. An additional six horses undergoing non-invasive surgeries were used as the anaesthesia control group. High-definition cameras were used the day prior to surgery and eight hours post-operatively to capture images of the horse’s expressions. High-quality images of the horses’ faces were extracted from the videos and then scored by five treatment-blind observers.

Changes in behaviour and pain scores were assessed and it was concluded that only horses undergoing castration showed significant changes at eight hours post- compared to pre-operatively. Explorative behaviours and alertness were also reduced. 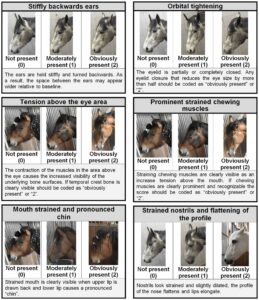 Facial expressions are commonly used to assess pain and other emotional states in humans. Standardised methods the assess facial expressions describe the changes to the surface appearance of the face, resulting from individual or combination muscle actions, referred to as ‘action units’. The use of the HGS is able to assist in the same way with horses. Its use post-operatively for scoring pain will have distinct advantages over manual behaviour analysis, which can be complex and time-consuming. 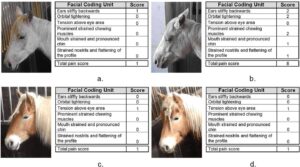 According to Dr Emanuela Dalla Costa and her colleagues, “Annually, it is estimated that 240,000 horses are castrated in Europe and, despite the severity of pain associated with routine castration in horses being contentious, the findings of previous studies have demonstrated this procedure is very likely to be associated with some degree of pain.” The HGS could also be further developed to identify facial action units associated with other states, such as fear and anxiety, so that we are able to differentiate pain from other states, she explains.

Horses and People is very informative. Welfare and safety of all horses. It educational because we never finish learning.

I buy the Horses and People Mag every month! Love the magazine always full of fantastic info…. I always keep the magazines for future reference.
Best horse Magazine in Australia I say…. Been hard to find an informative magazine that covers all disciplines.
I moved here from NZ 6 years ago and when I came across Horses and People I was over the moon!
So thank you!

Very down to earth and user friendly, horse magazine. Always learn something new, something useful and something inspiring in every issue.???

I have been reading your magazine for a few years now and find your articles full of relevant information for me. Thank you.

Hi Guys & Girls, I received my Mitavite voucher in today’s mail.. still shocked that I won… Thank you again!

Thank you, Horses and People! For the generosity and the opportunity to win such a great prize! Without you, no one would be able to win such great stuff, or be accepted into such a great page on Facebook, that is so informative and helpful!

I love Horse and People Mag as its up-to-date, relevant information allows me to look after my horse, as well as improve her well-being.

Like keeping up with articles and just have a general interest ,and a great magazine.

I would like to say how much i really enjoy this mag. I look forward to receiving my copy through the post every month.
I feel it helps to keep me up to date with everything horsey. It not only has reinforced and bettered my knowledge, but i have learnt so many new things i didn’t know. It helps you to look at some subjects for a different perspective. Most of all the layout and the simple way it is written makes it so easy to understand and absorb.

So thank you, for offering such an informative, interesting magazine at such an affordable price that makes it accessible to everyone.

Please keep up the good work as i feel a lot of horses out there would have a lot to thank you for!!!

It’s a great mag! I was getting it at my local feed store, but I was sometimes missing an issue… So actually subscribed!

The Equine Pain Face. How to tell if your horse is in pain

Learn to Recognise the Subtle Signs of Pain in Horses

Help us deliver our mission to safeguard and improve the lives, welfare and safety of horses and people. Your support keeps important information free from paywalls and accessible to all horse owners. If you like what you read on this site and want to help us deliver more tomorrow, please support Horses and People today with a donation and/or a positive (and free) review!